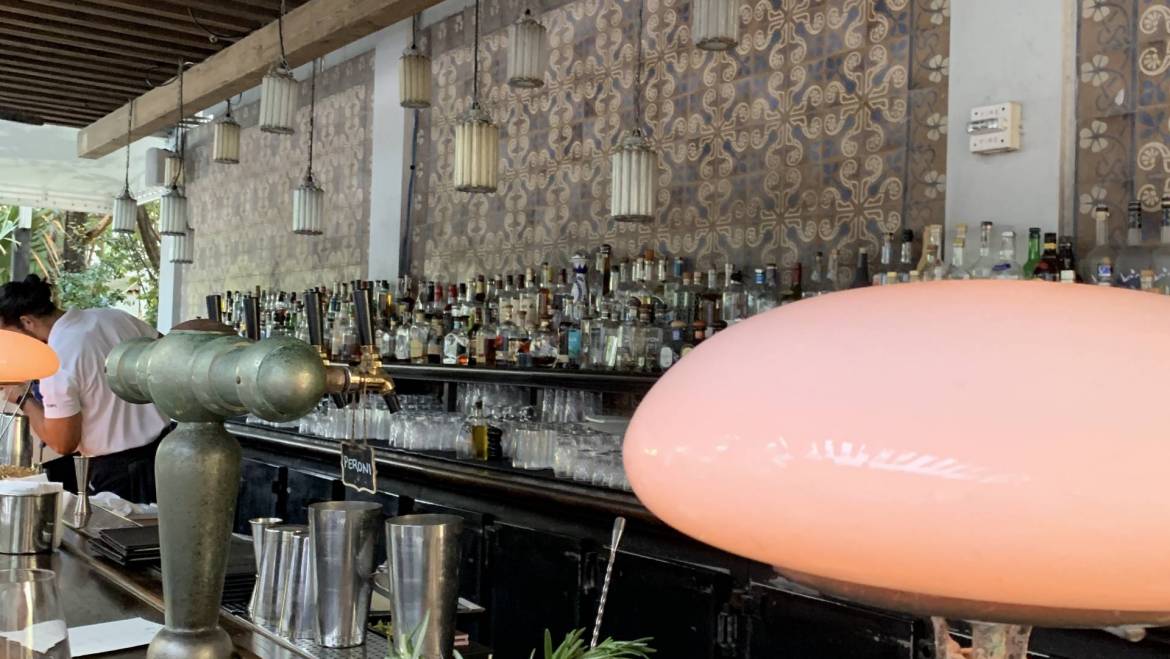 As its name gives away, Mid-Beach is in the middle of Miami Beach itself- South Beach to its south and North Beach above. In this heavily populated area of Miami, you get the best of both worlds- the nicest hotels in the area along with beachside resorts, nightclubs, and fancy restaurants. This area is spacious, relaxing and has more similarities to North Beach than touristy South Beach. You have to be friends with a local, or read it here from us, to really get a feel for the gems inside Mid-Beach.

Soho Beach House is one of Miami’s most popular, hard to access member’s only beach club that first made its name in London. It caters to creatives, celebrities, and other people that have money, connections, or score a membership. Although its demand has slowed down in recent years, Soho House was the coolest place to be- any celebrity that’s in town will most likely stay here or come by the Cecconi’s for a nice dinner or brunch. You can spot Soho beach chairs out of a crowd by their striped beach umbrellas and white cozy chairs. Don’t even think about coming here without someone with a membership, a rare day pass, or if you have a pass yourself, because they will turn you away in a heartbeat. Customer service? Not their strong suit! Unless you’re a celebrity, that is. Cecconi’s, the main restaurant in the beach club, offers a great happy hour with both food and drinks on the menu. The world-class spa, gym, and movie room are a few of their numerous perks for the members.

Looking for the most hyped-up spot on the whole beach? Make your way to the Fountainebleau hotel on 44th street and Collins. This hotel is the party spot of the entire city, with LIV right inside of it. You’ve probably heard this club being mentioned in dozens of rap songs and hip hop hits. LIV isn’t the only thing this hotel has to offer, though. It has an awesome spa, two large pools, pool parties with a DJ on Sundays, a beach filled with cabanas and beach chairs, and numerous fancy restaurants. Scarpetta, Hakkasan, and Stripsteak all reside in this luxury 5-star hotel.

Right outside Collins Park lies Sweet Liberty, a low-key bar that has some of the best burgers in the city. It is in an industrial, dark, building with colorful interior design and funky neon signs. The tropical, Hawaiian feel is something you won’t miss. Their cocktail menu leaves little to the imagination and their 95 cent oysters never get old. If you’re looking for a nice cocktail with some oysters, head over to Sweet Liberty for happy hour, and after go for a walk on the beach. This place shouldn’t be overlooked! They have late-night DJing from Thursday to Sunday.

The Edition Hotel became an overnight sensation right after its 2014 debut. Walk into the hotel lobby and you’ll smell what heaven smells like. Loads of plants and trees in their aesthetically-white pots line the entire lobby. You can come here to get an insta-worthy photo with the whites, nudes, and whites that encompass this entire hotel. This stylish spot boasts an entire skating rink and a bowling alley for guests. It sits right on the water and is very popular and pricey.